We cannot emphasize enough how freaking cool this documentary is and how it will challenge you to look at art through a lens you never expected to. We had the opportunity to speak to Montreal-based Una Lorenzen (originally from Iceland) about the stories woven throughout the documentary, the surprising amount of feminist themes that pop up, and why the art world needs to take heed.

First of all, congrats on such a brilliant film! ‘Yarn’ is a must-see documentary. How have audiences reacted to this film?

It’s been incredible! We are amazed by all the positive responses and interest and are exited to see what the rest of the world thinks as the film starts screening in the US this weekend!

There is so much synergy with the idea of a ball of yarn throughout the film, not only woven between the women’s stories and lives but also how it takes the audience on a journey around the world. What was the process of finding each of these women?

The idea was to make a poetic overview of the subject and so the film includes people from very different sections of the yarn world. They are the voice of the film, rather than us filmmakers controlling the overall message. However with a vast subject like this, a red thread is a must and when our writer and producer were looking for artists to highlight they were focusing on people who work mostly by hand (and as it turns out mostly crochet), a technique that is very trendy these days.

Both Olek and Tinna talk about how they are trying to take the “grandma” stigma away from this art form. As a director, what drew you to work on this project based around women who knit and crochet?

When the producers approached me I was immediately intrigued by the subject and the characters. Although the artists are not chosen based on gender it was clear early on that the film would have a strong message about gender equality and we embraced that. Although I don´t knit/crochet myself (learned it in school but haven´t done it since) I was of course surrounded by wool from day one because I’m Icelandic (the sheep have basically kept us Icelanders alive for centuries) and have an immense respect for it – how can you not!

I also have great respect for textiles in general since my mother was the head of the Textile Art Department in Iceland for 25 years. The memories of walking through the department, smelling the wet wool and the blotting paint and all those giant, gorgeous weaving looms is something that probably influenced my life and work in an indirect way. All these aspects, my personal memories of yarn and the strong voices and work of the characters made this project irresistible.

Each of the women are really doing something cool with crocheting in completely different ways: Tinna as a street artist, Olek as a disruptor and activist, Toshiko as an innovator in the early childhood play space, and Tilde in the performance space. Who was your favorite woman to film and why?

I have such a respect for all of the artists because they are all unique artists and have important and different inputs into the many angles of yarn. I especially like Toshiko, a textile artist of the older generation who then takes a turn in her career, turning the art form into something completely unique, fascinating and needed. In the film she also gives us a much-needed insight into the history of the medium. But our view(s) as filmmakers didn’t influence the way we put the film together, everyone that watches the film seems to gravitate towards different characters in the film – that’s what makes it fun, to see our audience each connect to one or more of the characters. 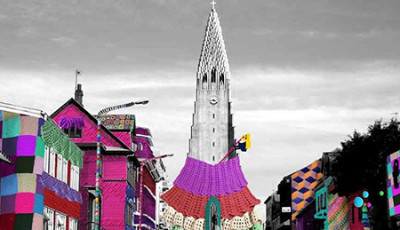 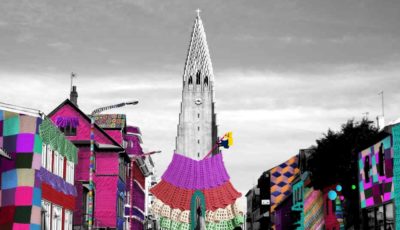