What once was a traditional rite of passage for Icelandic children has now become punishment. Whereas her mother probably visited her Aunt Ólöf’s (Katla M. Þorgeirsdóttir) farmland to learn responsibility and work ethic away from the allure of her ocean-side city, young Sól (Gríma Valsdóttir) makes the trek as penance for shoplifting — itself a byproduct more or less attributed to her life’s upheaval upon her parents’ separation. Gone are her friends (although she states she has few), her sisters, her mother (besides the oft letter), and her phone (poor rural reception). It is time for Sól to learn independence by being thrown into the deep end. But while Asa Hjorleifsdottir’s debut The Swan is mostly from her perspective, she’s not the only character unlocking her unfiltered identity.

This film — based on Guðbergur Bergsson’s novel — instead shows how its farm is an unwitting locale for purposeful self-reflection and catharsis beyond mere dumping ground for adults seeking to give their troublemaker a kick in the pants. One could say it’s a time capsule of sorts thanks to Ólöf and her husband Karl’s (Ingvar Eggert Sigurðsson) rejection of the more modern aspects of contemporary farm life. They enjoy the simple existence they’ve built because it allows them the chance to stay involved in their now college-aged daughter Ásta’s (Þuríður Blær Jóhannsdóttir) evolution. And with the help of only a single farmhand (Thor Kristjansson’s Jon now entering his seventh summer of service), they survive. To outsiders their comfort might seem cold, their stiff-backed stoicism judgmental resentment. Neither is true.

No, they’re the steady rocks younger generations need to support their penchant for aimlessness, rebellion, and uncertainty. Ólöf and Karl open their doors to the neighborhood kids (they literally hold the keys to the town pool) and leave them open for those in their care. And when things go awry, they do their best to remain rocks despite the emotional turmoil barely stifled below the surface. Time might have passed them by as far as being more readily effective than suffocating, but the environment provided remains crucially safe regardless. The drama may not be aired as loudly as in the city, but it still exists and hurts just as much. If nothing else the quiet merely helps those hurting look within to find the root of their problem.

So while Sól’s trajectory is the plot’s main thrust, she’s really a conduit to a vérité depiction of life’s myriad complexities. A storyteller with her younger sisters, the film uses her imagination to enhance feelings and experiences as well as the emotional connections made with those on the farm. She ultimately sees Jon as a kindred spirit with artful words (and as a sexual being with which to lust over). Ólöf and Karl are accepted as steadier hands with discipline and authority than her parents (her manipulative lies proving ineffective). And Ásta enters as someone with a similar reservoir full of anger and frustration (albeit from much weightier issues). Jon provides her a light touch, Ásta a sometimes-cruel superiority. And Sól learns most from their volatile love/hate relationship.

They teach her about love: physical and emotional. She learns about life and death via their reactions to certain concepts she doesn’t understand and natural processes her young mind hasn’t steeled herself towards. The latter arrives via the inevitable slaughter of a new calf born with her assistance. This animal becomes her friend, its non-judgmental silence a huge positive of her stay. She orates her stories onto its “deaf” ears like Jon writes his in secret journals locked from prying eyes. Ásta only tells her truth to her parents (although we see those interactions, which derails the device of everything happening from Sól’s perspective). All three are therefore embarrassed, scared, and/or depressed. The monster that lives in the mountain’s lake is no match for those that haunt each.

This is where the title originates: a creature taking on the shape of a swan to lure prey into the water. But as an Andrei Tarkovsky quote uttered by Jon states, “We don’t want other worlds; we want a mirror.” Perhaps that swan is less a beast readying for the kill than a guide towards reflection. It beckons those who brave the journey closer, forcing them to look directly at themselves without any distractions from external stimuli. More than the advice of elders or promises of peers — more than the pleasures of flesh or the purification of art as a necessary escape — this glimpse within is where truth lies. Our experiences, good and bad, are what drive us to the edge of oblivion and what coax us back.

Everyone onscreen experiences both and Sól observes everything. Ásta uses verbal aggression to work out her anger and Jon takes to alcohol. Ólöf and Karl internalize their struggles, only emitting stern reprimands when pushed too far. There’s a perpetual pain in everyone’s eyes that disappears for rare moments of pure joy when they allow themselves a reprieve from the guilt and regret weighing them down. What’s sold to be a peaceful summer of hard work and discipline proves just as messy as home. The difference is that Sól isn’t the one causing trouble as the eldest of three girls looking to give her mother a difficult time. She’s the witness, the wallflower looking in on their pain and heartbreak. And she’s also in a position to help them.

Credit young Valsdóttir for imbuing her role with a mix of curiosity and entitlement, innocence and devilishness. Much of the film rests on her shoulders, but more with how we interpret events through her eyes rather than what she herself does. In that respect Jóhannsdóttir and Kristjansson earn the spotlight as those characters doing their best to hide true emotions in front of her gaze while also ensuring the audience isn’t fooled by their flimsy façades. Everyone is so caught up in the images they believe the others wish they’d possess that any instances wherein they cannot hide become even more intensely personal and oftentimes devastating. Only when they finally face their swan (with Sól holding that mirror for most) can they acknowledge who they really are. 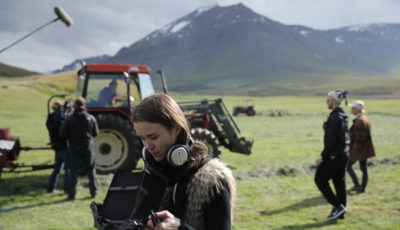 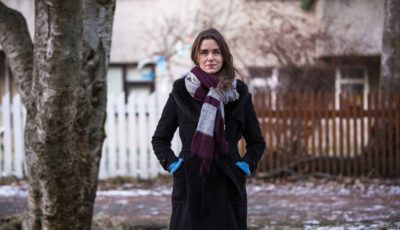 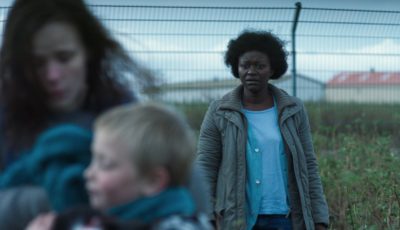 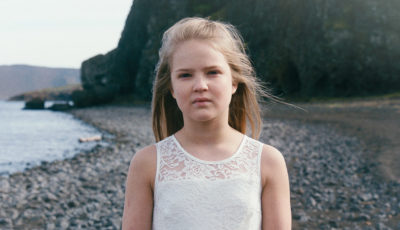